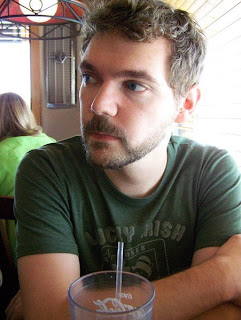 Tyler Windham flips through windows on the screen manically, toggling between the full image and closer areas. He examines every speckle on the creature’s skin, every fold in its robe, his eyes roving to catch mistakes.

“I’m hardly ever satisfied, but sometimes you have to let go because of time constraints,” Windham says. His eyes are still on the screen.

“I wake up thinking about art, go to bed later than I should thinking about art,” he says. He is single minded in his pursuit. He wakes up, doodles, goes to class and then draws. He is mainly self-taught, ordering books and materials to learn new techniques.

His father was concerned with his choice until Windham showed him a drawing of a violin he had done. Now his father requests prints of all his work and no longer wants him to be an accountant.

His Moleskin notebook is saturated with black ink. Because he is ambidextrous, Windham can work on two sketches simultaneously, his scrawl transforming each page.

His drawings start with black and white, perfecting the values that will be the basis for the rest of the picture. From a mass of black, he erases to form thumbnails of figures. He transfers one sketch to another document.

Windham adds colors with custom brushes, made from sponges, cotton balls and anything else he can find. He renders to add shadows and depth, then takes away the line art to reveal his work. After the image is completed on the computer he prints it on Archival art paper and bonds it to a wooden board. He tweaks with oils or acrylic and it becomes a painting.

In his fifth year of college, he still feels as if he is leaving the party early. At 23, he is now enjoying the college atmosphere. His exit show, comprised of six or seven pieces, is just another opportunity to show his work to family, friends and other artists.

“It’s not really that big of a deal to me. It is, but it isn’t,” he corrects himself.

Windham plans to learn how to transform his sketches into three-dimensional renderings, making his work more relevant for books, movies and videogames. Even though he sketches are nearly perfect, this machine is never satisfied.

Stitches, the BFA drawing and painting exit show for Spring 2007 will run April 20-26 in Lamar Dodd. A reception will be held on April 21, from 7 to 9 p.m. Windham’s work is available online at www.tylerwindham.com.